Darius McCrary
Edward James Arthur "Eddie" Winslow is a main character portrayed by singer/actor Darius McCrary on the ABC/CBS American sitcom Family Matters from 1989 to 1998. In the series, he was the teenaged son and eldest child of Carl and Harriette Winslow.

During the early years of Family Matters, Edward—or Eddie, as he was commonly known—is a typical teenage boy, whose main interests were cars and girls. Throughout school, he was a mediocre student, earning only average grades (although once, Rodney changed his grades by hacking into the school's computer system as a practical joke). Often, his judgement was not the best and this frequently landed him in trouble. Several times, he developed a gambling habit and was prone to not going to Carl out of fear he'd be yelled at. This landed him in trouble with a pool shark named Boyd Higgins, a tough bookie named Bones and the law. In the latter instance, he tried to gamble with Steve at an illegal casino to pay for repairs to the family car, which he damaged while driving without a license because he was trying to impress Jolene. In this case, he was happy to have Steve as a buddy for his mathematical skills and "Urkel luck" which caused them to win $32,000, only for the place to be raided by the police and both Steve and Eddie to be handed over to their fathers to face the music. Other times, he let other people take the blame for his mistakes (such as the time he said nothing when Steve told Carl he drove the family car through the front of the house). However, on most of those occasions he later admitted his guilt (as in the aforementioned car-through-the-front-of-the-house incident, where he admitted his guilt after finding out that Dr. Urkel was so angry with Steve for the purported damage that he was soon on his way to a military academy). Eddie also had let Steve take the fall in A Test of Friendship. Although feeling guilty, he refused to help save him by confessing, because it would show he didn't study. Eddie eventually confessed after Laura threatened to tell their parents and the school the truth about him cheating on his chemistry test if he didn't save Steve from expulsion. Eddie's father, Carl, often came down very hard on him, something that frustrated him to the point that, more than once, he threatened to move out of the house (and once actually made good on that threat). However, Eddie would eventually see the error of his ways and make up with his father. He often got along with his mother, Harriette, while having typical "brother/sister" relationships with his younger sisters, Laura and Judy. In time, Eddie gained maturity, even coming to his father when something wasn't right; for instance, he told his father he had been scammed by a con artist, who promised him and Waldo Faldo a chance to meet members of the Chicago Bulls at a bar he owns (which Urkel had suspected all along and refused to go inside) and THUS was left with an expensive bill. Another time was when he got ripped off by Weasel's friend when he sold him a stolen stereo system, which Urkel also suspected of foul play. However, he still was prone to late-night carousing and other mistakes. The latter trait nearly backfired when Eddie was the victim of a harrowing racial profiling incident with two overzealous Caucasian police officers and Carl did not initially believe him, as he had already gotten in trouble the night before for breaking curfew and figured Eddie was just using it as an excuse for more misbehavior (everyone else believed Eddie but Carl didn't and thought he was lying). Carl later confronted both officers in a coffee shop and found out that Eddie was telling the truth when the senior officer who arrested him revealed himself as a racist. Outraged, he took action by reporting the senior officer, while encourage the rookie to re-evaluate himself. During the early years of Family Matters, Eddie liked to play basketball. In fact, one of his dreams was to become a basketball player in college, and possibly be drafted into the NBA. While basketball remains one of his passions in later years, he re-assessed those dreams when a former college standout told him about the pitfalls of putting sports before academics in college. Eddie, who worked for several years in a management position at the Mighty Weenie restaurant, enrolls in college but his academic skills are still meager, and eventually realizes his life-long dream is to follow in his father's footsteps. During the final season, Eddie attends the police academy, and is hired by the Chicago Police Department as a rookie officer. Eddie is progressing well in his new profession, which is detoured for a short time when his overprotective mother, Harriette, has him transferred to parking enforcement. Eddie is grazed by an armed robber's bullet, but he is nonetheless able to capture him. Harriette soon learns her lesson that while the job is dangerous, he still needs to do his job and protect his community. Like his father Carl and sister Laura, Eddie is also constantly irritated, annoyed,and harassed by his nerdy next door neighbor and friend Steve. He later started valuing Urkel's friendship and came to accept him as a true friend.

Eddie's original name in a draft of the Perfect Strangers episode Crimebusters, is Steve Winslow, the name given to a variation of Steve Urkel in It's Beginning to Look a Lot Like Urkel. The name Steve would be reused for Steve Urkel. Steve Winslow was also supposed to appear in that episode.

Toward the end of Season 6, Eddie began dating Greta McClure (Tammy Townsend), who became his longest-lasting girlfriend. Greta was the daughter of Eddie's boss at Mighty Weenie at the time, David McClure, and he did not approve of the relationship. However, Greta continued dating Eddie, despite her father's eventual withdrawal of financial support for college and Urkel (at one point) acting as a go-between. Had the show gone into the tenth and final season, the two would have married and moved to New York City.

Eddie is also friends with Alex Park, whom he calls "Weasel", played by Shavar Ross. Weasel happens to be a hard-headed, troublemaking best friend, who likes mooning meter-maids (which Carl is very offended by because it disrespects law enforcement officers), and once won an award for most days in detention.

Like the rest of his family, Eddie's relationship with next-door neighbor Steve Urkel — who is two years younger than him and the same age as Laura (though their actors, Darius McCrary and Jaleel White, were actually 6 months apart in age) — evolved. During the early years, Eddie felt little more than pity for Urkel, and like Laura and Carl, thought of him as annoying; Urkel, meanwhile, idolized Eddie and (perhaps thinking of him as a big brother) considered him his "best bud." However, Eddie was grateful for tutoring help the math-whiz Urkel gave him and he felt obligated to protect him from a bully that threatened him with serious harm.

Carl, Eddie and Laura are wondering if they have ever talked to Steve's parents Dr. Herb Urkel and Diane Urkel about how their son Steve Urkel is always been mischievous to him, his father Carl and his sister Laura.

As the years progressed, Eddie warmed up to Urkel and eventually accepted him as a loyal and true friend. Frequently the two, along with other friends such as Waldo Faldo, would engage in various capers and would up sticking up for each other. Eddie and Urkel would also help each other resolve various personal crises. They are now brothers in law since Steve married Laura.

Eddie has at least 2 adversaries on the show.

Eddie's first adversary is Urkel's cousin, Myrtle Mae Urkel (played by Jaleel White). She was a southern belle from Mississippi. Appearing for the first time in the episode "Cousin Urkel," Myrtle fell in love with Eddie at first sight, despite Eddie's obvious dislike for her. Like Urkel did in his pursuit for Laura, Myrtle frequently went to great lengths to capture the object of her affection, such as sneaking into Eddie's bedroom at night and trying to kiss him. However, unlike Steve, who respected Laura's personal space, Myrtle refused to leave Eddie alone and kept pursuing him, much to his extreme terror. In Swine Lake, Eddie even demanded that Myrtle should "for the last time, stop meddling in his life!". He went on to say that there was no way they will ever be together, and not only did he not love her, he didn't even like her. However, this didn't seem to deter Myrtle at all.

After several years away, Myrtle returned to Chicago to visit Urkel and renew her pursuit of Eddie; by this time, Eddie and Greta had started dating. However, Greta is more successful in warding off Myrtle than most of Laura's would-be suitors are at chasing away Urkel. Myrtle was not discouraged, and Laura even gave her a makeover to help out. However, Eddie reaffirmed his rejection of Myrtle; eventually, she relinquished her crush on Eddie. When this happened, Eddie realizes his life would be boring without Myrtle mixing it up by reaffirming her love for him and asks her to stay. She refuses and replied, "Frankly, my dear, I don't give a damn."

Dave McClure, played by Ron Canada, is Greta's overprotective and strict father, and owner of Mighty Weenie. He strongly disapproved of his daughter dating Eddie and did whatever he could to keep them apart. He forced his daughter to attend boarding school, but some convincing from Greta allowed her to attend public school; in addition, among all the limits he's placed on her he even did not allow her to date other guys before Eddie.

In season 7 after he was late in bringing Greta home, he forbade him from seeing her again. They went continued secretly dating while using Steve as a go-in-between. Eventually, Mr. McClure found out and rather than let Urkel take the fall, Eddie accepted responsibility for his actions and got fired. Refusing to back down, Steve confronts Mr. McClure for his brash behavior in firing Eddie. He showed maturity and great character in what he did and this is how their boss rewards him. Urkel tells McClure off that if he's the kind of boss who fires others for taking responsibility for their actions, then he never wants to work for McClure again. Eventually Mr. McClure sees the error of his ways, but insists that Eddie and Greta wait a month.

In Season 8's Getting Buff, it was revealed from Laura that he and Greta had a serious fight and he threatened to disown her if she doesn't end her realtionship with Eddie. She refused and he not only withdrew financial support for college, but also disowned her. He was never heard from again after this. 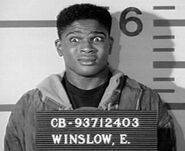 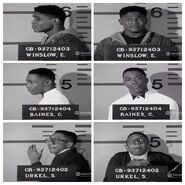 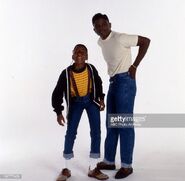 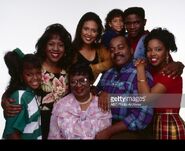 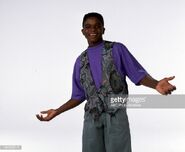 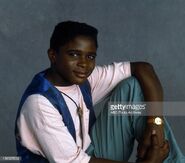 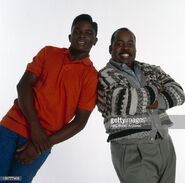 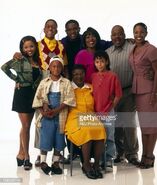