Don't Make Me Over

Cherie Johnson
Maxine Johnson is Laura Winslow's best friend. A few times, she has convinced Laura to do things that her father Carl would never approve of, such as going to the Sizzle Club in skimpy outfits or get back at Eddie by inviting all his former girlfriends to his birthday party. She was played by Cherie Johnson.

Maxine has gone through a string of relationships with guys before finding love with Waldo Faldo. After they apparently broke up in season 8, she had a hard time finding a good, stable guy to be in a relationship with after Laura found love with Steve. She has dated Curtis Williams in season 8 and D'Andre in season 9. However, Laura was suspicious of him, but Maxine wouldn't listen to her. She learns the hard truth about D'Andre's drug trafficking when Eddie and Willie arrests both the guy and him.

Maxine's feelings for Steve are much softer than that of Penny and Laura's own mainly due to them coming from similar backgrounds in having neglectful parents.

In the final season (had the show continued on), it would've been revealed that Waldo had gone on a discovery trip and had no intentions of ending his relationship with Maxine. He tells her that he wanted to marry her once he got back in Chicago and that his cousin, Bob, had screwed up the postcards (Bob's postcard was revealed to want to end his relationship with a girlfriend of his). Now host of his own tap dancing cooking show, Waldo marries Maxine and they have a steady life together in California with children of their own. 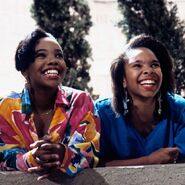