Requiem for an Urkel

Send in the Clone

Shawn Harrison
Waldo Geraldo Faldo (Born March 6, 1970) was portrayed by actor Shawn Harrison and part of Family Matters from 1990 to 1996. In Season 2 and 3, he was a recurring character. From Season 4 to Season 7, he was a main character.

For most of the time Waldo was featured on the show, he was friends with Eddie Winslow (the son of the show's main characters, Carl and Harriette Winslow) and the Winslows' quintessential nerdy and bothersome neighbor, Steve Urkel. He once started off as the sidekick to resident bully Willie Fuffner, but has grown out of it.

Waldo's most famous trait was his dimwitted-ness and uncanny ability to misinterpret a simple question, comment, or directive. Waldo discovered, however, in Food, Lies, and Videotape that he is a culinary prodigy which led him to get an A in home economics which was a big thing for him to swallow. His catchphrases include: "Cool", "No prob, Bob!", and "Sup!". Despite his lack of intelligence, he has shown that he has a sense of morality in three key episodes. The first was in A Test of Friendship, when he told Eddie off that cheating is wrong and he should've known better. The second was in Talk's Cheap, when he called Laura, Eddie, Myra and Myrtle back to their senses with Stefan’s help. The third time was in Tips For a Better Life, when Waldo refused to let a recently kicked out Eddie move in with him. He tells him off, saying that if anyone drinks at a party and insults friends, they are no friends of his. He tells Eddie that the guy Eddie is when he drinks isn't a friend of Eddie or Waldo. The two are friends by the next episode.

Waldo would date around with other girls, including Laura — until meeting the girl of his dreams, Maxine.

Had the show continued in its final season, Stefan would help Waldo get back together with Maxine. He is able to explain the postcard mess that one of his cousins made while he was away and hosting a tap dancing cooking show. There would then be a wedding snafu resulting in Eddie marrying Maxine and Waldo marrying Greta and it was up to Steve and Laura to fix the mess. When a T.V. executive from California wants to make his show live on national television, Waldo had a hard decision on his hands, but eventually decides to move there with Maxine. Before leaving, they along with Eddie, Greta, Myra, Cornelius and the rest of the Winslows witness the birth of Steve and Laura's daughter, Stephanie Laurine Urkel.

He most likely would have been performed by another actor due to Harrison leaving the show because of Shawn's contract not being renewed. 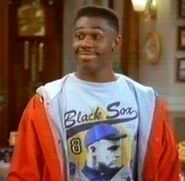 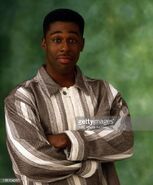 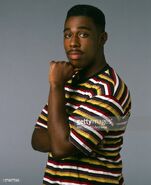